Running Virtual Desktop in the Quest and added streaming apk with SideQuest, SteamVR games are running in the Quest. Screen Quest is live recorded in Quest itself !

I played some VR games like FlyInside and Google Earth VR in the Quest and was surprised by the quality. FlyInside is an flight sim where you really sitting in the cockpit. Most of buttons and handles are activated by touching with your virtual hands. Even sitting on a fixed chair, it feels very immersive to dive in a turn.

Flying in Google Earth VR is amazing. Search your home and fly around in 3D. Step in the 360 streetview and be really there.

My last presentation on the VMUG TechCon in March was all about how the journey of VR/AR is running into the future. After a few years there are several new products to make 2019 the year of VR.

VR creates an immersive virtual world. AR let you enhance the real world with digital add-ons. Better display’s, wireless and easy to use 6dof (6 degree of freedom) are available now. The best HMD (head mounted displays) are the HMD with more than 180 degree FOV (field of view). StarVR, X-TAL and consumer friendly PIMAX produce these. All connected to a big PC.

I was waiting for the new Oculus Quest and happy to be an owner now. After a few weeks working with this device, I’m very excited about the potential of this headset. No wires, easy setup and 6dof. Streaming the user view to Chromecast v3 on a big TV is great for the others, watching why you are running around with funny moves.

Everything is bigger and immersed in the headset: You don’t need a big TV (3D) to watch movies ore Netflix. 360 photos and videos are now the ‘real’ world. With a stream application ALVR, it’s possible to stream content from you PC. SteamVR games run in the Quest. Not all high end games, but Google Earth VR is working well. Fly over your hometown in 3D and visit places on the whole world. Even the Desktop of your PC is on a very big screen available.

What if we can create a virtual workspace in VR with all the screens we need (more is more productive), team meetings virtual in the same room we live video communication? It’s possible with ‘BigScreen’ but more professional in vSpatial. This could be the workspace of the future. Running virtual desktops in the cloud and share with the team. vSpatial is working on the Quest version. I can’t wait its ready.

Flying around the world to meet members in the project is reduced with this technology. It save more time and CO2 , save the environment. Just to drink a beer together we must physically meet, so do not replace all by virtual. All my earlier bought stuff and profession experience is coming together in the Oculus Quest. My first 3D video camera, Samsung Gear360 camera and virtual desktops. If you see the right path, every investment in time and money is worth of it. Join the journey!

So if you want your phone also as a VR device wait for Note 8 (maybe 4K screen). We need 4K screen for VR.

Why next step in replacing the workspace? Samsung makes a great step in the ecosystem with this smartphone. I’m a believer in virtual workspaces. With the S8 in the new Docking station, this smartphone connect a big monitor and transforms in a desktop computer. Connecting a VMware virtual desktop with the Horizon client, you have a real Windows, Linux PC on your screen.

In 2005 I believed in the next big thing: the virtual desktop on your phone. It here now. In a year, Samsung has answers my question: the new Gear360 camera can also connect to iPhone6S. Better battery live and live streaming. If the next Note8 has a 4K screen and can do the same as the S8, VR is also in the pocket.

This is not a new gadget, it’s a toy shop with possibilities.

TSX2005 VMware had a contest “what’s the next big thing” I photo-shopped a little bit: a docking station with windows mobile over RDP. (Another idea from Belgium VMware users was local ESX stores mounted as shared to vCenter: we know it now as vSAN.) 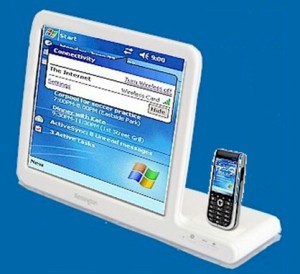